History
Russell Farm is an historic farm on the south side of Burleson that was donated to the City of Burleson in October 2011 by the Boren family for historical, art and agricultural/natural uses. The farm has been passed down through the family over the years.

Martha Glenn Russell
Martha started the farm in 1877. She and her husband, Dr. Robert Russell, moved to the Marystown community, Johnson County in 1874. He built a country store and practiced medicine. Two years later he passed away. 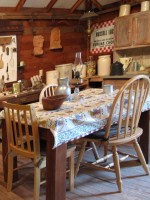 Martha had 5 young children to raise alone so she sold their store and bought 540 acres of land at what would become the Russell Farm. She moved her family into a new 3-room home on Christmas Eve of 1877. Even today, the central core of the farmhouse is made up of 2 of the 3 original rooms built in 1877. View Martha's Story PDF

In order to ease the workload of maintaining the farm, Martha opened some of the land to settlers who could raise their families while sharing some of the labor around the farm. Martha died February 7, 1931 and was buried beside her husband in the Marystown Cemetery.

The Russell Farm was entered in the Texas Family Land Heritage Program in 1977 by Martha Russell’s grandson, Russell Lace. This program honors family farms that have been in continuous operation for at least 100 years.

Martha and Russell Lace chose their nephew, Charlie Boren, to keep the heritage alive. Charlie, along with his wife Louise moved to the farm in 1979. Charlie Boren’s vision transformed the farm into the Russell Farm Art Center. For more than 30 years, Charlie worked to achieve excellence in the artistic use of wood. Charlie’s sculpture is exhibited in museums and galleries and in private collections throughout the world. Just as Martha Glenn Russell had opened her land to newcomers looking for a place to work and raise a family, Charlie and Louise continued with the foundation of the Russell Farm Art Center, a Texas chartered, 501(c)(3) non profit organization dedicated to the development and support of visual arts, cultural awareness and the preservation of historic lands. Russell Farm Art Center is part of what is now the City-owned Russell Farm. Mr. Boren passed away Sept. 4, 2018.
Online Bill Pay
Report It
Agendas/Notices
Jobs
Watch Meetings
Elections
Government Websites by CivicPlus®
[]