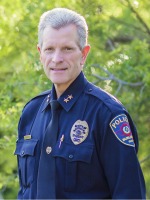 Billy J. Cordell was sworn in as Burleson’s tenth police chief on June 2, 2015. He retired as a deputy chief from the Fort Worth Police Department where he served since 1985. The Burleson Police Department consists of 75 sworn officers and 19 civilian support staff.

Chief Cordell is a strong advocate for building community partnerships and believes these relationships form the foundation for trust and accountability. He embraces the Community Policing philosophy and understands the servant role of law enforcement. Chief Cordell notes, “It is an honor and a privilege to serve as Burleson’s Police Chief.”