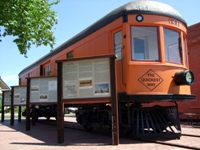 Interurban Express Motor #330 is the oldest rail car of its kind in North Texas. It was actually once painted Pullman Green, but the rail cars were repainted bright orange after several accidents involving rail cars.

The rail car ran the electrified rails of North Texas from 1902-1934 on the Fort Worth-Dallas and Fort Worth-Cleburne interurban lines. The freight/express rail car carried everything from ice cream to coffins. Interurban service between Fort Worth and Cleburne ended in April 1931 because with progress came good roads, vehicles, and bus lines. Rail Car #330 returned to the Fort-Worth Dallas line where it hauled freight until December 1934 when that line also ceased to operate.

Interurban Express Motor #330 was obtained by the Burleson Heritage Foundation in 1998. The 5-ton trucks were moved to the pad site in April 2008. In May 2008, 4 informational kiosks were placed next to the trucks. The panels illustrate the founding of Burleson and development of the Burleson Independent School District as well as the relationship of the rail system that was instrumental to the growth of Burleson.

In February 2010, Burleson City Council members approved an agreement with the foundation that makes the City the sole owner of the rail car. Heritage will operate and manage the rail car as part of the Burleson Visitors Center, which is also owned by the City.