Officer of the Year 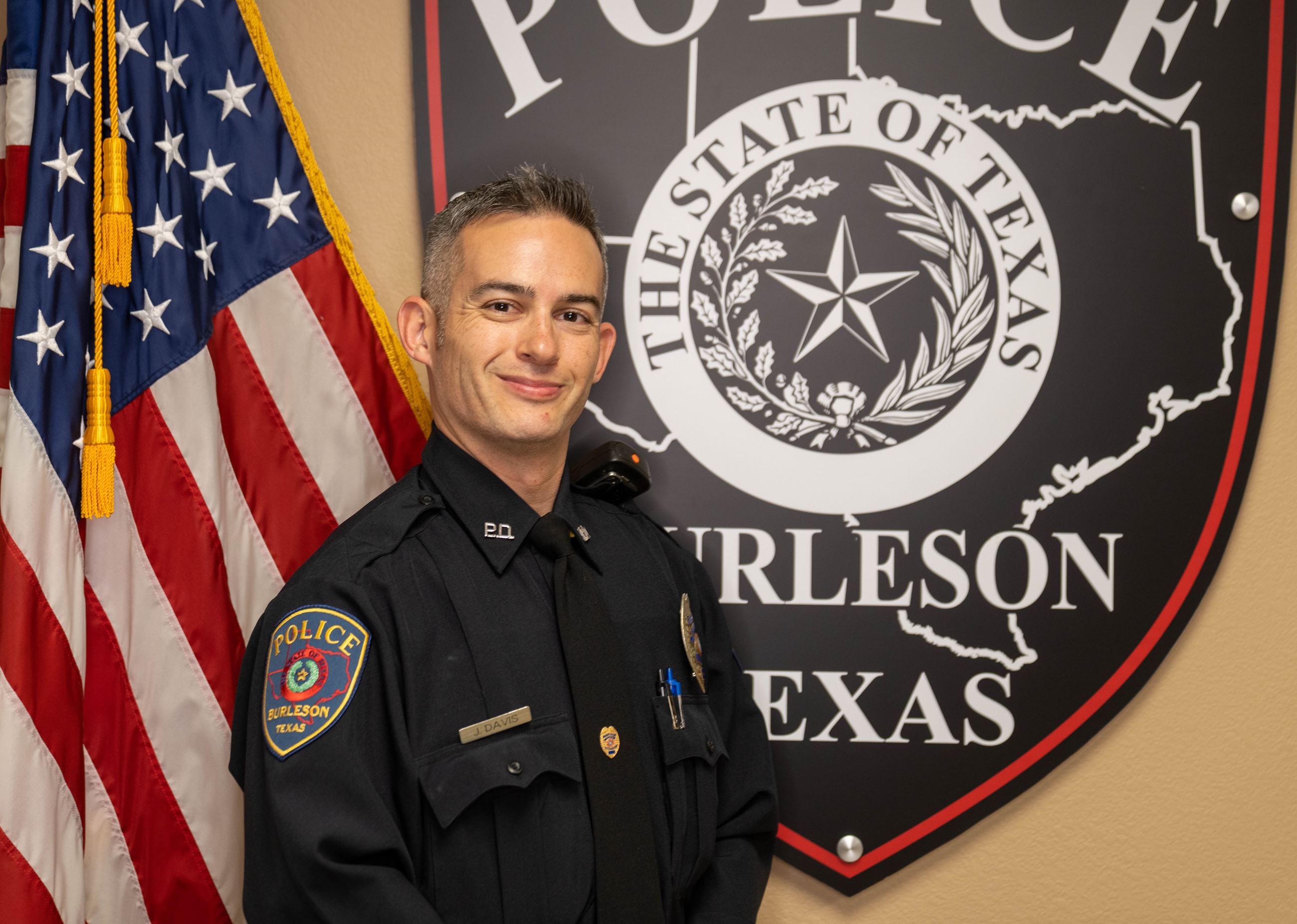 The 2020 Officer of the Year is J. Davis, a 15-year veteran assigned to the Operations Support Bureau.

Officer Davis has served in various extra duty assignments, including field training officer and crash investigator. Officer Davis takes these additional responsibilities very seriously and understands the importance of his contributions to the Burleson Police Department.

Officer Davis has served on the crash investigation team for many years. Again, his tenure places him in a position to train new members and excels in this role. This team is on-call for major crashes, so they must be available at any given time. Officer Davis's dedication and commitment to this role are vital to training new team members successfully.

Officer Davis is one of only three officers in the department that speaks Spanish, and for many years he was the sole Spanish-speaking officer in the department. He uses his skills to translate for citizens to ensure their needs are met. His willingness to assist the department reflects his commitment to ensuring that quality service is provided to non-English speaking citizens.

Officer Davis's work ethic places him in a position to be recognized as the officer of the year. He goes about his work without an expectation of recognition, just a simple goal of doing what needs to be done. This award recognizes Officer Davis's outstanding daily routine of making the department better, helping his teammates succeed, and exceptionally serving the citizens of Burleson. 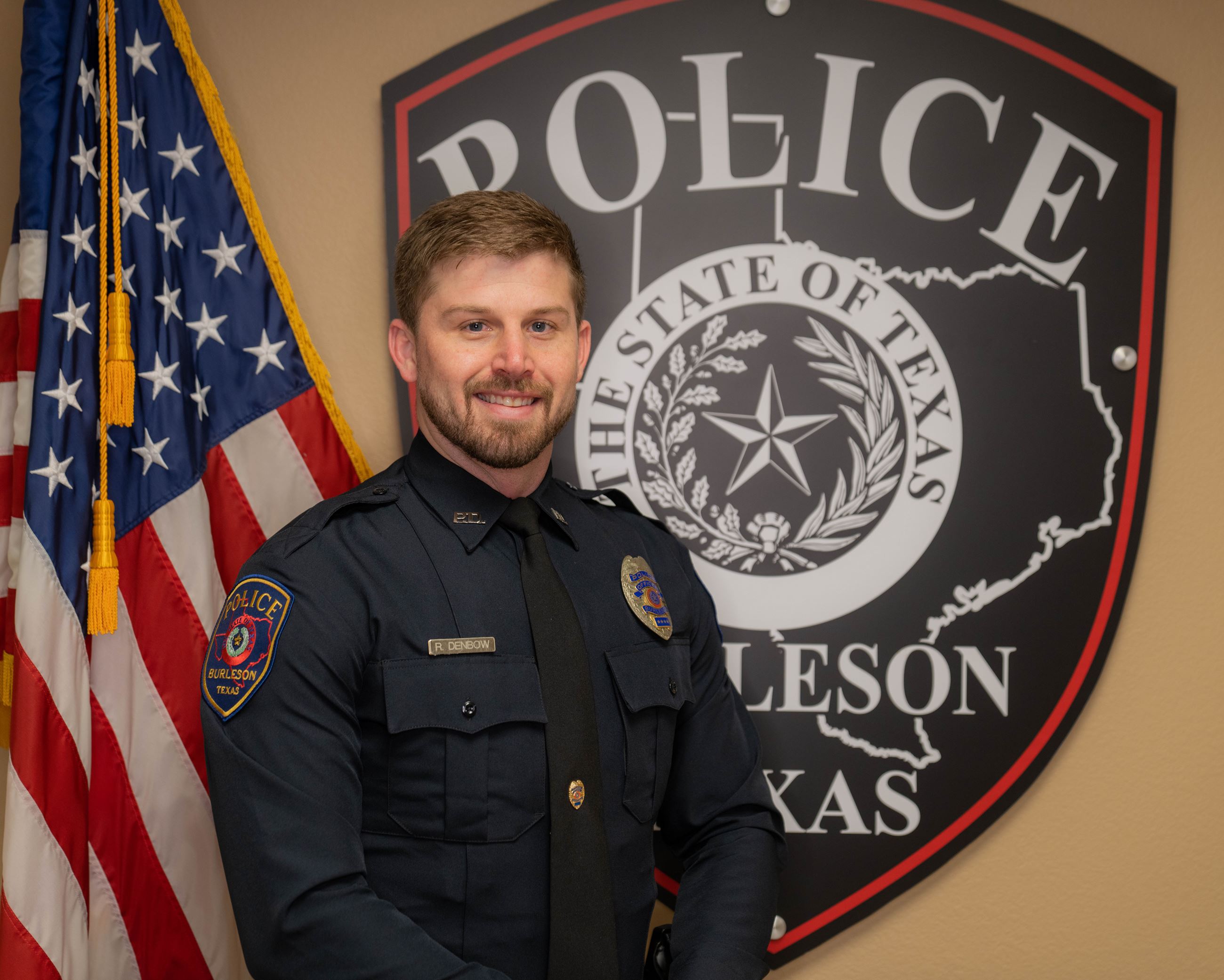 Rookie of the Year

Officer R. Denbow was selected as the 2020 Burleson Police Department Rookie of the Year. Officer Denbow has been with the department for two years. After graduating from the regional academy, he spent almost six months in field training before achieving solo status on January 6, 2020.

Since completing field training, Officer Denbow continued to excel as a rookie police officer. He is eager to learn, accepting of criticism, and often seeks feedback in order to better himself. Officer Denbow has shown to be a real team player, evidenced by his statistics since his release to solo status. Officer Denbow is quick to help both the citizens and his fellow employees. He understands the seriousness of the job that we do and trains mentally and physically, both on and off duty, to ensure he is up to any task. Officer Denbow is polite, compassionate, and serves as a great representative of the Burleson Police Department.

Supervisor of the Year 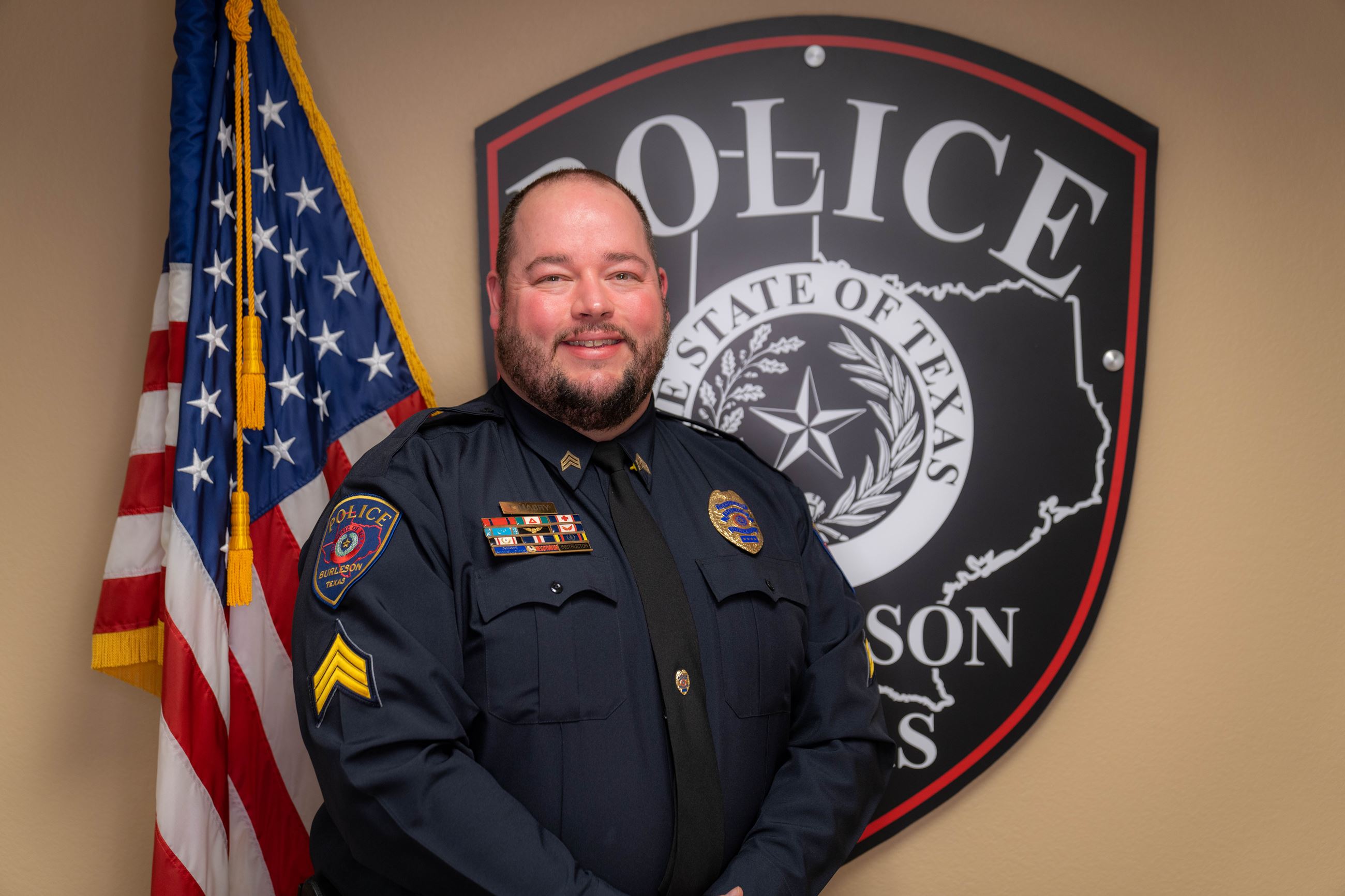 The 2020 Burleson Police Supervisor of the Year is Sergeant T. Mabry. Sergeant Mabry, a 12 year veteran of BPD, has been a sergeant for three and a half years, serving the last two and half years leading the Criminal Investigation Division.

Sergeant Mabry made quite the impact on the criminal investigation section during 2020. His leadership and oversight of several high-profile investigations throughout the year ensured the integrity of the cases were maintained and resources were available to investigate thoroughly.

Sergeant Mabry coordinated a murder investigation and other high-profile cases to include sexual assaults, shootings, and a stabbing.

In addition, Sergeant Mabry updated several procedures and protocols to improve the efficiency of the investigative team. He worked diligently on a five-year strategic plan, outlining future needs and direction for his team. His research and thoroughness of the strategic plan led to expanding the plan departmental-wide. He closely reviews, monitors, and provides guidance for all cases assigned to his staff. He maintains oversight of thirteen staff members.

Sergeant Mabry maintains a close and professional relationship with surrounding law enforcement agencies, the Johnson and Tarrant District Attorney’s offices, judges, and the community he serves. Besides the tremendous amount of work Sergeant Mabry does every day, he always makes time to stop and check on his co-workers. His positive words of encouragement motivate those around him, and his willingness to help with any task is appreciated.

Civilian of the Year 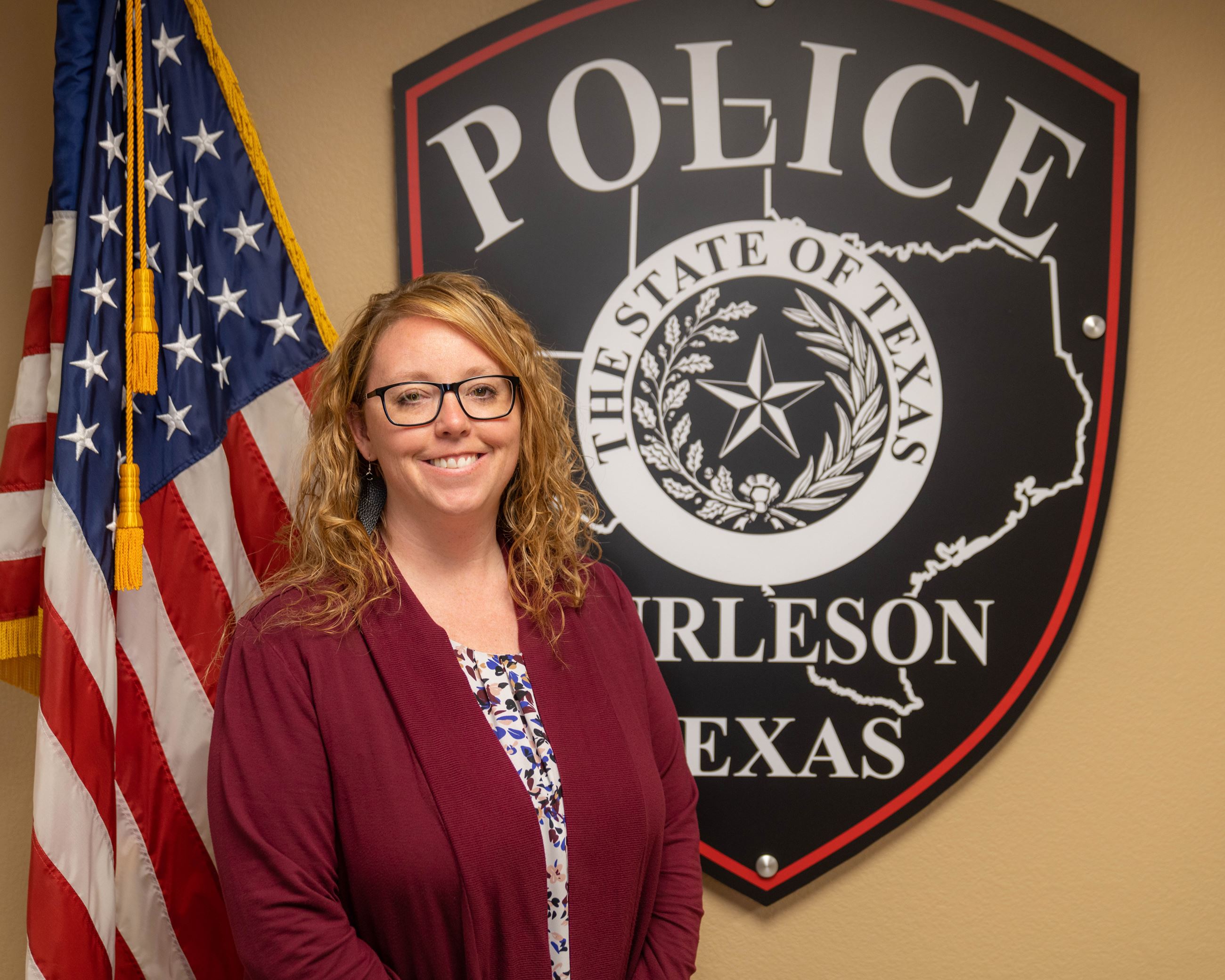 Burleson Police Department's civilian staff works diligently behind the scenes in support of the department's mission. The department is proud to recognize Stephanie Colson.

Stephanie began her Burleson Police Department career in the Records Division in October of 2019. In early 2020, the Criminal Investigations Section (CIS) found themselves with a vacancy at the clerk position and solicited help from Records. Stephanie volunteered to take on the overwhelming task of filing numerous cases, organizing files, and learning a new job while fulfilling her duties in the Records Section. Stephanie made quick order of the objectives at hand and completed the task at an expedient pace. Through Stephanie's contribution, CIS was able to catch up on case files while maintaining its present workload. It cannot be emphasized enough how much her assistance contributed to this department's success during that time.

Stephanie was selected for the vacant position in May 2020 and has played an instrumental role in the unit's success. Her self-motivation allowed her to streamline several processes that have led to overall efficacy within the section. She mastered several techniques to simplify case filing, maintains logs for case follow-up, and provides supplemental information to the prosecutor's office. The checks and balances system she implemented has ensured the department complies with providing all Brady material to the appropriate prosecutor's office. It should be noted 1,494 cases and 642 supplemental packets were filed in 2020, and all of these cases funnel through Stephanie. Further, Stephanie has trained Records personnel to ensure her duties can be accomplished in her absence. Finally, Stephanie assists detectives with case packets for arrests and warrants, leading to an overall reduction of rollover caseload within the section.

Stephanie is most certainly the right person for her position and she continuously exhibits a teamwork mentality. She prides herself on being a contributing member of this department and does so with a positive attitude every day. To say Stephanie is a valued member of the team would be an understatement.

The Ofelia Blair award is in honor of former Burleson Police employee Ofelia Blair, whose actions exemplified outstanding character in the service of others. Her compassion, empathy, and professionalism reflect the traits defined by this award.

The 2020 honoree for the Ofelia Blair award is Detective Mark Pate. Mark has been a member of the Burleson Police Department since June 2010 and is currently assigned to the Criminal Investigations Section. In addition to his primary assignment, he is a SWAT Medic, Crash Reconstructionist, and Shooting Reconstructionist. Detective Pate is a dedicated member of this department and has exhibited his ability to be a team member and a leader within the roles held during his tenure. His dedication does not stop at the police department’s doors. Outside of work, Detective Pate serves as an Assistant Scout Master for a local Boy Scout Troop. Mark leads training related to first aid, firearms safety, fingerprinting, and other criminal justice processes in this capacity. Detective Pate earned his Eagle Scout during his youth and expressed he is driven to help develop future leads through Scouting.